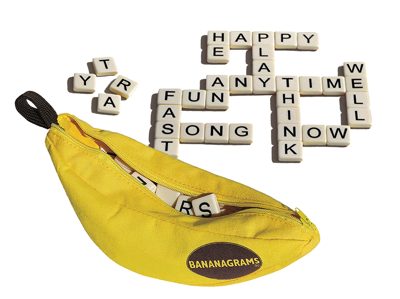 There is no stopping this recession buster! BANANAGRAMS® has been wowing audiences for over two years now and its momentum has only been increasing in 2009 with their 2009 “Game of the Year” award and with the launch of a “bunch” of new games!

Winning “Game of the Year” at the New York Toy Fair only galvanized this best-sellers’ salability and lovability across the U.S. and the world and set it in motion to gain more and more hearts and minds this year! 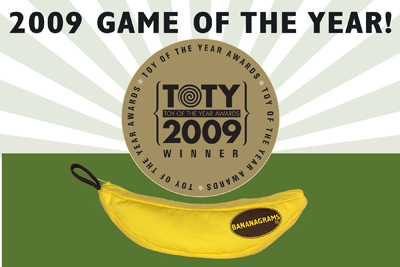 Fast, fun, portable, addictive, and educational are all the common descriptions that are helping BANANAGRAMS make its place in the home and on the road. Parents, teachers, and kids alike are raving about how it makes learning fun.

This passion for educational games has lead to the creation of a whole line of new games. SPANISH BANANAGRAMS is now shipping, which is great for bilingual play and helpful in learning Spanish. DOUBLE BANANAGRAMS is a larger banana pouch with twice the tiles, great for classrooms and parties of up to 16 players.

The NEW GAMES include APPLETTERS (TM) which is a new domino-type game, in which you don’t connect the dots, you connect the letters! There are 110 premium quality, ivory-like tiles which stand up like dominos. The object of the game is to use all your tiles by ‘making a snake’ of words. The tiles are contained in a zippered cloth apple pouch.

And the educational fun continues with PAIRSinPEARS(TM), which consists of 4 sets of alphabets in 4 different patterns: solids, outlines, dots, and lines. It’s a fun game of making pairs of words. The game consists of 104 beautiful ivory-like tiles in a fun, pear-shaped, cloth zippered pouch.

“We have found our niche!” says Nathanson, “There’s nothing much more gratifying then seeing so many people fall in love with the game and parents and teachers so happy that they found something so fun and educational!”

BANANAGRAMS is now available on iPhone and on Facebook, which has made it very accessible in the world of technology. With the new award, the new products and the many ways of playing BANANAGRAMS, you can expect to see this game becoming more and more of an icon of educational fun!

“ADDICTIVE!
This is a family favorite! There are a variety of ways you can play this game. We use three or four sets for our large “extended” family games. One of the best facets of this game is its portability—fits in a purse, backpack, or car glove box. ”

“GO BANANAS
Just recently played it with 2 retired teachers, a 1st grade teacher, and a librarian. We couldn’t stop playing it. Later one of the friends called to say she had just ordered two of the games: one for her home and the other for her granddaughters. Many ways to play. Exciting!”

“GREAT FAMILY GAME
My daughter has monthly infusion treatments at the hospital and we can take it to play while she’s getting her treatment. You can even take it to restaurants and play while waiting for food. The kids love the banana shaped pouch and everyone’s spelling is rapidly improving and their vocabulary increasing while playing the game. ”

“BOUGHT IT FOR WORK, BUT…..
I’m a librarian and we bought three sets of Bananagrams for a games camp we’re doing this summer. It was the hit of the week! The adult assistants were actually ignoring the kids so they could play their own game.”

“WE PLAY EVERY DAY!
I was shopping for a Christmas gift for my niece last December, and came across all of these rave reviews for Bananagrams. So I bought one for us 50/60-somethings instead (she’ll get one this year.) It lives on the kitchen table and we play a few games almost every morning before we go to work. GREAT GAME!!!”