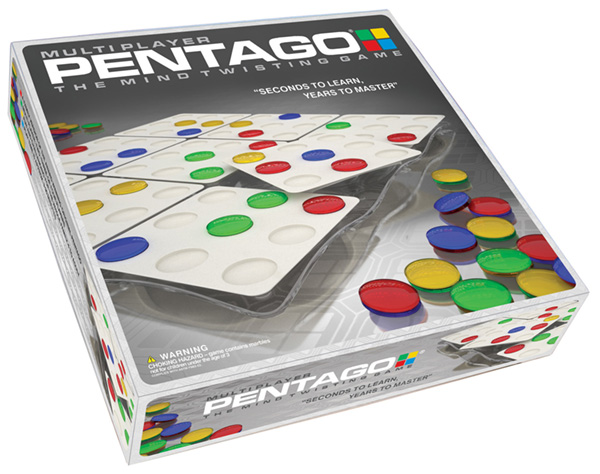 Mindtwister USA was founded in 2006, when two Swedish, professional skateboarders came across a game called Pentago. Pentago originated in Sweden and was released into the European market in 2005. Because of the uniqueness and strategy of this game, these two skateboarding entrepreneurs set out to bring Pentago here to the USA and Canada. Since its humble beginnings, Pentago has won numerous awards and sold over one million games worldwide. Mindtwister USA has developed into a prolific game company which offers a variety of different board and card games in their line; all of which offer fun, mind twisting gameplay for everyone.

"Great Toy! The object of this tic-tac-toe style game is to get five marbles in a row. The challenge is that the play area consists of four separate blocks – one of which will rotate a quarter turn as part of every move. The constantly changing play board adds a strategic element that appeals to sophisticated strategy gamers. But happily, the game is easy to learn and just as much fun for beginners."

"Pentago Multi Player is maddening - in a really fun, addicting way! It is easy to get the game started - but a superbly crazy game to master and win. The game will never be played the same way twice - so once you think you've got it figured out - think again! It's as simple as place a marker and twist! Good luck and have fun - we know you'll love it - but don't say we didn't warn you!"

What the Stuff Toy Review:
5 out of 5 Stars

"What We Thought: Pentago is so intuitive players can begin a game without even reading the directions, and its sleek design and simple concept make it immediately attractive. The more one plays it or watches a game of Pentago, the more its nuances are revealed. One reviewer found it reminiscent of an extended tic-tac-toe game, and a little weak on the defensive end — not as well developed in the area of giving players opportunity to directly interrupt their opponent by, say, knocking out an opponent’s piece or issuing some kind of trump card-like counter attack. He appreciated, however, elements that other players applauded, too: the simple rules, quick play, and opportunity for extended matches. “I like Pentago specifically because it’s not too hard, so it has a wider appeal with non-geeks,” another reviewer commented. One player noted that Pentago features the long-term planning of chess but without the complexity. And, it seems the simplicity of the game gives a novice a greater chance of beating an expert than games like Othello or Tannhauser do.

Why They’ll Want It: As one reviewer noted, “This is one of the most elegant [strategy games] I’ve ever seen.” The sophisticated design, “twist” play, portability and easy-to-learn rules are all pluses for Pentago CE, as is the fact that it can be effectively covered in mid-play so opponents can return to a game later on, if need be. Also, since a game can be played in just five minutes, it maintains a rapid-fire pace that keeps players from getting too discouraged when they make mistakes. — Julie L. Jones, 5/29/09"